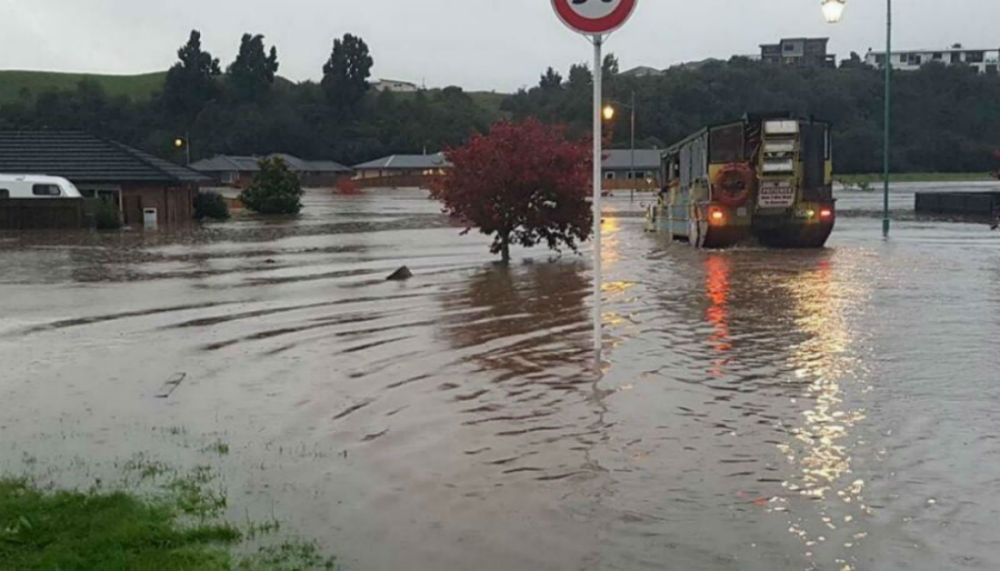 Posted at 03:34h in Rotorua by Amelia Jensen
Share

A State of Emergency has been issued by Rotorua Lakes Council mayor Steve Chadwick for residents in Ngongotaha.

Chadwick said Fire and Emergency New Zealand told her an emergency declaration was needed for the area after a number of homes were flooded. “The banks of the Ngongotaha Stream have breached and quite fast flowing water has broken into Ngongotaha.”

At least 24 houses were flooded, though that number could increase, Chadwick said.

Niwi figures show that between 10 and 11am, Rotorua had its wettest hour since hourly records began in 1964. In total the town recorded 167.8mm between 4am on Saturday and 6pm on Sunday.

It trapped 23 people at the Agrodome, a tourist attraction. Earlier reports said 200 were trapped, but Ngāi Tahu Tourism later revised the number.

The stream that caused flooding at the Agrodome, Ngongataha Stream, was the reason for the state of emergency at Ngongotaha. Fire crews were helping the residents leave and would take them to an evacuation centre.

Chadwick urged affected resident to pack a small bag and wait for someone to come to them.

Anyone needing urgent help was asked to call 07 348 4199 as soon as possible.
The Agrodome will be closed on Monday, or until full structural checks can be made to the bridge and a site inspection has been completed.

And in the Coromandel Peninsula, six campers were trapped by heavy rain at Wentworth Valley, near Whangamata. They are understood to be stuck but were safe on Sunday.​

The storm system hitting Waikato, Coromandel and Bay of Plenty continued to rage into the early afternoon.

Further north in the Coromandel, Pauanui was experiencing flooding. On Sunday, several roads in the town were flooded, including Beach Road, which a resident said was a metre under water. The Hauraki Plains were hit hard as well.

The Ohinemuri River Bridge on Barry Road, Waihi, has been closed as a precautionary measure until it can be assessed by a structural engineer. Detours are via Trig and Golden Valley roads.

State Highway 25 between Whiritoa and Whangamata was closed most of Sunday due to flooding, but re-opened at 5pm.

In Rotorua, resident Jan Chesterman said a neighbour’s sinkhole had collapsed. “The bank is breaking through. There’s quite a bit of water and rocks and whatnot coming down here.

“It’s thundering past … If the weather gets much worse, it’s actually going to get quite serious.”

Northern Fire Communications shift manager Scott Osmond said local fire stations were inundated with calls about Rotorua. “We have had over 100 jobs in Rotorua. We’re attending as many as we can, but we can’t get through all of them at the moment.”